After seeing Dana Gioia last Monday evening at Fuller Seminary in Pasadena, I was pleased that I had not decided to stay home and clean the surfaces (see earlier post, Poetry and a Clean Surface).

Now that I think of it, the week presented several enriching moments, both trivial and significant. We had been at the Bonaventure in Los Angeles during the rain, which provided some wonderful moments, if you are someone who loves watching the weather change. It is always an uplift to be with the impressive and active teachers in the CTA organization (I am just a tag-along with my husband, but I get inspired when I hear some of them talk about their approaches to education — yay, teachers!).

The next day, after making no progress with my filing and paperwork at home, we headed for Pasadena. We had parked the car in a structure near the auditorium and then went in search of a restaurant. Because it was the first one we saw, we went into the Le Cordon Blue College of Culinary Arts restaurant, Technique, on Colorado Boulevard. It was one of those magical nights when delightful surprises appear, unsolicited. We loved the minimalism of the decor, our warm-hearted waitress, a Brazilian student at the school, and the incredible and reasonably priced meal (I had the coq au vin, my husband had steak). 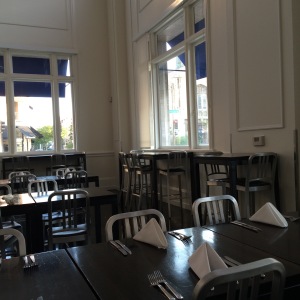 We were a few minutes late to the event, and I blame the waitress who gave us a little extra wine, since it was so near the end of the bottle. We got our seats at the back of the auditorium, and though we didn’t have the best view as you can tell from the photo I took, Dana Gioia was a most engaging and spirited speaker.

I had seen his name for years on many of the anthologies I used while teaching American literature and Introduction to Literature courses, and even then I was amazed at how many he had edited (for just a few of them, see anthologies). He has also written books of poetry, was the Chairman of the National Endowment for the Arts for several years, and now he is the California Poet Laureate, appointed by Governor Brown in December.

The term “laureate” comes from the use of the bay laurel leaf, which was used to make a wreath or a crown for the winner of a competition, and though the tradition of having a national poet laureate dates back to the 14th century when Chaucer was given the designation along with (and you can apprehend my secondary theme here) an annual wine allowance (see citation below for Poets Laureate: A Brief History).

The responsibilities of the office include public readings in various state locations as well as a major cultural project. Gioia had already instituted a major poetry program as the NEA Chairman called Poetry Out Loud. In that program, managed by the California Arts Council, students learn poetry, recite it, and compete for prizes.

Gioia’s comments about art and poetry were impassioned and persuasive. He believes that we can change culture by using our gifts, especially our gift of language. You can “help create the society you want to live in,” he said; “Our gifts can change the world.” Art has the “power to awaken us to our own humanity,” he said. Poetry, he pointed out, plays an important role in education as it “educates our emotions.” He wants the vocabularies of students to grow, not diminish into being mainly comprised of trademarks and brand names. Poets show us more about the “subtleties of our existence.” Speaking to a Christian audience at Fuller Seminary, he mentioned sermon literature, the parables and poetry of the Bible, and the importance of having language skills with which to express one’s beliefs, joys, suffering, and experiences.

In 1991, his article, “Can Poetry Matter?” in the Atlantic Monthly became the locus of ongoing discussions about the value of poetry in culture. A lot has happened since then, including success with his other program, “Operation Homecoming,” a series of workshops in writing for returning soldiers. He certainly lives what he believes, and we are so fortunate that he is our state’s poet laureate. 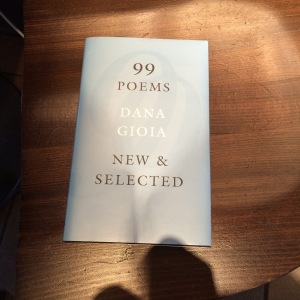 A man of many accomplishments, he is worthy of a book just about his own efforts to brighten up our world with his insights, writing, and influence. He mentioned the famous lines from the Keats poem, “Ode on a Grecian Urn”: “Beauty is truth, truth beauty . . . .” We should work in the cause of truth, he said, and then followed it up with “I believe in beauty.” So here’s to truth, beauty, and also wine, the poet’s nectar. Speaking of wine, here is a photo my brother sent me of the winery known for making the best wine in the world, the Domaine Romanée-Conti in France.

What are your thoughts? Cancel reply