Interested in the habits of other writers, I usually ask those who write about their methods and practices. I like thinking of the many ways that writers practice their craft, the environments they create in which to write, the types of materials they use, and their routines for getting started. I carry the images with me when I sit down to write, and it helps me to realize again how we find our way through the process in so many different ways.

Timothy Greek is a long-time close friend of ours (he and my husband have been friends since their high school years participating in theatre performances), who has had the same writing practice throughout his lifetime. A poet, now in his sixties, he has always carried around several 3 x 5 cards on which he jots down the lines to poems as he thinks of them. I recall him in his twenties, usually carrying a science fiction novel that had 3 x 5 colored index cards tucked away in between the pages. You can imagine how many cards he must have now.

It may take some time before they emerge in typed form on a regular sized page, and when they do, the result is as distinctive as his method. Here is a poem from our reading in Redlands, California with Luanne Castle over at Writer Site after her first collection, Doll God, came out:

The wine of Jesus had legs.
Though in his day,
They would say
It would float on water
Like a healing oil
At that osmotic line
Between heavenly fruit and earthly salt.
Only his feet could crush
The two into one.

You can see that he enjoys word-play. Here’s another:

So far, comme ci, as above
So good, comme ça, so below

Swells clarity’s pulse,
The wealth of the heart that is open.
The rhythm of above and the beat below.

So far, comme ci, as above
So good, comme ça, so below

Choosing swine and judging pearls
Ah the whetting stone, used to guide the edge,
not thrown or hurled.

Intent, unlike the truth-bearing blade, is whole
Undivided by dichotomy.

So far, comme ci, as above
So good, comme ça, so below.

A regular at Starbucks, Tim is an almost daily customer. Even in our twenties, we met at coffee shops to discuss poetry and literature, and if I could recall the “enfoldments,” Emily Dickinson’s term for epiphanies, that we had during our conversations, I would record them in a book. Actually, I remember many of his comments as I used to jot them down. One of them comes to mind now: “It is short, aggression, but creativity is long and beautiful.” Coffee plays a large role in his regular process, though in the main, it is his original mind that perpetuates such interesting poems. Recently retired, he will be writing more frequently now that he has the rich gift of an abundance of time.

Here we are at a party, toasting to poets throughout time! Feel free to post your habits, practices, customs. 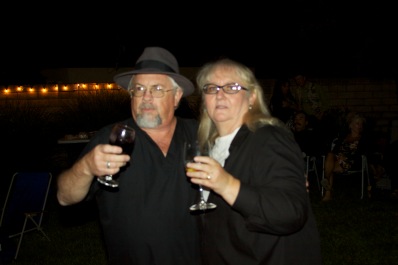 33 thoughts on “Appreciating Those Who Write – Timothy Greek”